Infrastructure, a safe haven in times of uncertainty

A broad range of issues are affecting our daily lives – inflation, rising interest rates, market volatility, energy crisis, geopolitical risk – and feature heavily in the media. Meanwhile global warming is also a key priority for both the public and private sectors. In the post-pandemic world, uncertainties abound, and the social, environmental and digital transitions have simultaneously accelerated, impacting players and all sectors.

These major transitions combined with substantial uncertainties raise both opportunities and challenges for the infrastructure markets and industry stakeholders. The 11th edition of Natixis CIB’s Infraday was an opportunity to hear from 25 panelists, all senior representatives from equity and debt infrastructure funds, industrials and public authorities from around the world, and discuss how to get ahead in such a challenging context.

They offered their insight into combining energy transition with energy security, addressing massive infrastructure investment needs in emerging sectors and regions and gave their take on the acceleration of the circular economy.

Vox Pop: discover an overview of the event with interviews of panelists 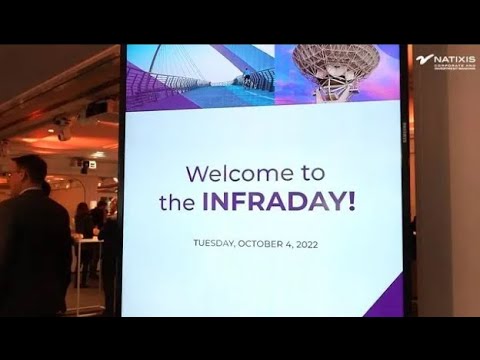 Watch all the Replays and Videos

“There is no transition without infrastructure transformation”, stated Anne-Christine Champion, Co-Head of Natixis CIB, in her introductory speech. In a world undergoing transition, infrastructure investment needs are set to grow and accelerate at an expected rate of more than 6% per year between 2022 and 2027.

According to the International Energy Agency (IEA), global energy investment must double by 2030 – from $2 trillion per annum over 2016-2020 to $5 trillion by 2030 – if we want to reduce our economies' net carbon emissions to zero by 2050, the ideal scenario for limiting global warming. More than half of these investments are expected to come from the private sector.

The climate transition will bring infrastructure needs, but other changes will also drive this growth: the digitalization of the economy and the growing urbanization of the world's population will also require huge investments, not to mention the renovation of existing infrastructure. The digital transition in particular is driving robust demand on aspects such as data, 5G roll-out, fiber, etc. More traditional types of infrastructure will also be required, such as transportation, especially in some parts of the world where needs have not yet been addressed.

Beyond the energy and digital transitions, new social trends have also emerged and accelerated, such as proximity, flexibility and autonomy: these are fueling further demand for new types of infrastructure. However, public investment programs remain insufficient, especially in emerging countries, where the financing gap is estimated at $ 1.3 trillion per year.

With this strong expected growth in mind, infrastructure is less exposed to market movements than other asset classes. It benefits from natural protection against inflation as it boasts stable cash flows, while interest rates are generally hedged over the long term.

On the other hand, today’s environment is undergoing drastic changes, which require a more selective approach in the way projects are addressed. Some investors prefer to sit tight and wait due to doubts over where and how to invest in the current uncertain environment, while also maintaining a long-term view.

Bénédicte de Giafferri, Global Head of Real Assets at Natixis CIB, concluded the Infraday with this vision: “We are selective, bringing quality to the projects we support and not necessarily quantity, adapting our approach to these new paradigms, all with one priority: sustainability”. Let’s look back over this day of extensive debate with a quick overview of the main themes.

Inflation is here to stay

Jean-François Robin, Global Head of Natixis CIB Research, opened the conference with a macroeconomic outlook. He noted that inflation stands at levels unseen over the last 40 years i.e. 9% in the US and 10% in Europe. These figures will decrease in 2023, but inflation will not revisit previous levels. He also confirmed the end of 40 years of falling interest rates. Central banks are now steering the market, raising rates at unprecedent speeds and levels. As a result, a major slowdown – if not a recession – is looming.

Jean-François Robin also singled out deglobalization as another major change: supply chains are becoming regionalized again, with location decisions no longer based solely on price considerations, but also on energy and environmental criteria. Meanwhile looking to the energy crisis, he believes that the peak in prices is now in the past, as gas storage facilities are full. However, the situation for 2023 remains uncertain, and the pace at which the world can accelerate the energy transition with the ensuing massive investments remains unknown.

The conference continued with a first roundtable on “combining energy transition and energy security”. Russia’s invasion of Ukraine and the ensuing effects on energy security have been a wake-up call on energy supplies, particularly for Europe. The long-term goal remains to shift from fossil fuels to renewables, but has this priority been overshadowed by the need for energy security – at least temporarily?

It would seem natural to assume that this recent situation should accelerate the transition to clean energy, yet it will also imply reliance on other commodities, such as metals and critical minerals, which are key to produce low-carbon technologies, but in turn are caught up in the global supply chain bottleneck.

Circular economy: the new investment mantra in the environment sector?

They also explained how the development of green and sustainable finance is contributing to the sector’s expansion. Finally, panelists called for a transition taxonomy that is not based solely on the “do no significant harm” principle, as this approach excludes entire areas from the taxonomy, such as energy from waste, and tends to divert funds away from these projects.

Electric vehicle (EV) charging: financing and investing in the sector

European countries have made massive commitments to promoting electric vehicles. With electricity costs currently soaring, Benjamin Bygott-Webb, Managing Director of EQT, gave his perspective on the roll-out of EV charging infrastructure and the financial opportunities offered by this emerging sector. He also focused on his recent experience on EQT’s acquisition of InstaVolt, a leading independent charge point operator in UK which focuses on public rapid charging.

He explained that EV charging is quite a new sector that emerged just three or four years ago and discussed the importance of understanding the business model. He also focused on the importance of securing the best sites by being a first mover and the key role that grid connection costs will play in this sector, which will help curb competition from other operators in the future.

How do current macroeconomic events affect the infrastructure market?

Nathalie Kosciusko-Morizet confirmed that in a context that she expects to get tougher, “Infrastructure is the place to be, as it shows high resilience. Markets remain open both for equity and debt.” Marc Vincent observed that there is still a great deal of liquidity in the market and a huge number of transactions have been finalized, even if there have been slightly lower levels of capital raising. All speakers agreed that infrastructure supports long-term trends, and that the current slight increase in the cost of capital does not reflect rising risk, but rather growing costs for banks.

Lastly, Natixis CIB devoted one of the day’s panels to investment in countries where huge infrastructure needs are still not sufficiently addressed, such as the Middle East and Asia, where project finance is becoming easier and which increasingly attract foreign investors.

The conference ended with a focus on Saudi Arabia’s highly ambitious infrastructure plans and its extremely determined energy transition plans, as speakers discussed how best to deliver them. Esmail Al Sallom, Chief Executive Officer at National Infrastructure Fund, and Paddy Padmanathan, Vice Chairman and Chief Executive Officer at Acwa Power, discussed a range of topics including desalinated water and green hydrogen, the role of development finance, and how Saudi Arabia can contribute meaningfully to Europe’s energy requirements whilst complying with their firm decarbonization targets.

Thank you to all panelists for their insights.

Tokenisation: Real assets for all?

2022, a year of breakthroughs for the floating offshore industry