New green and sustainable (G&S) bond issuance continued its year-on-year decline in Q2 2022 for the second consecutive quarter, with overall volumes standing below EUR (equivalent) 200 bn for the past quarter. This has been the result of unfavourable macro and market conditions due to the ongoing conflict in Ukraine. However, the overall volume of G&S bonds remains on the rise, reaching EUR (equivalent) 2 tn at the end of June 2022.

The plan consists of a three-pronged approach. In the short term, energy supply and security will be the top priority, given the elevated risk of disruption in the months to come. In order to meet targets, there will be a focus on optimising and expanding existing gas infrastructure in order to facilitate more diverse supply sources. The US and large middle Eastern players such as Qatar will play an important role in covering this gap. Alongside this, there will also likely be a short-term increase in power production from coal – particularly in Germany – in order to cover the shortfall in affordable energy.

In the medium and longer term, this focus will be different. The energy shift will act as an accelerator for various other initiatives already under way at European level – notably, its Fit For 55 (FF55) plan, which aims to cut the continent’s greenhouse gas (GHG) emissions by 55% by 2030. To make this possible, renewable electricity production will be ramped up, with biomethane and renewable hydrogen development targets rising considerably. Indeed, FF55 targets a renewable energy supply of 5.6 million tons per annum, while under RePower EU, this will increase to 20 million, of which 50% will be imported.

RePower EU marks a clear step up in energy transition policy and, by extension, investment – significantly increasing the current funding anticipated under FF55. By 2027, investment is expected to have risen by EUR 210 bn, and by 2030, this is expected to reach EUR 300 bn.

Of course, the sheer scale of these additional investments raises a significant financing issue. Already important players in the G&S bond market, European utilities will undertake a significant portion of this incremental increase in investment. In turn, this will lead to an uptick in issuance in the G&S bond market. Yet while utilities have already started to plan substantial increases in capital expenditure (CapEx) over the coming years – largely on the back of increasing investments in renewable energy – the question will be whether or not they will be able to raise the funds necessary to carry them out, and, indeed, whether the market itself will be able to absorb these expected additional flows of emissions.

Ebitda growth alone will not be enough to offset the expected spike in CapEx. As such, we expect RePower EU will translate to an incremental increase in €-denominated G&S bond supply from utilities companies to EUR 40-45 bn per annum by 2030 from the somehow usual level of 30-35 bn per annum.

How will the extra borrowing affect European utilities? From an Ebitda to net debt perspective, their leverage ratios will slightly deteriorate in the coming years. However, the assets that will be developed from this investment – which include reinforced and expanded power grids, increased renewables generation and electrolysis capacity – will offer stable cash flow from a bond supply perspective. As such, we do not expect the additional CapEx to weigh on utilities’ credit profiles.

The EU was the key issuer during this period, raising EUR 13.5 bn through green bonds. Elsewhere, France reached a new milestone by launching the first ever inflation-linked green bond, and we saw sizable issuances by the Austrian and Dutch treasuries, which raised EUR 4 bn and EUR 5 bn respectively.

Over the past quarter, greeniums have remained stable, with German greeniums tightening marginally during Q2, hovering at around two basis points (bps) despite a challenging market context, while green OATs managed to outperform nominal OATs in terms of asset swaps. On the bid-offer side, we continue to see a widening of spreads – notably during the second half of June, where we saw strong widening across both nominal and non-nominal bonds.

Looking ahead to Q3, of the EUR 95 bn of green supply we expect for this year, only EUR 33 bn has been raised so far, meaning gross supply will need to increase substantially during H2 2022. The EU is likely to remain the biggest issuer over the following quarter, given its EUR 65.5 bn global issuance target for H2 of this year. It is expected to raise up to EUR 22 bn via green bonds alone before the end of the year and is likely to launch two new green bonds in order to support this. We also expect to see considerable activity from Belgium, France and Italy – with the latter currently lagging behind its peers since the beginning of this year.

Record volumes for covered bonds, but seniority in short supply

The greenium for European corporate credit slightly widened during Q2 2022 to almost 4 bp, and is currently close to its record level.

Additionally, as of this year, the Eurosystem will consider climate change risks when reviewing haircuts applied to corporate bonds used as collateral.

Finally, before the end of 2024, risk assessments on corporate bonds will consider climate risk, and these risks will be included in national central banks’ in-house credit assessment systems. High-carbon companies will likely be downgraded as a result.

This was content covered in the webinar that seemed worth including. The information in the report looks at secondary markets, however for this content some higher level, primary market statistics would work better.

Do we have any stats we can add on primary market issuance? For instance:

1. An update on primary market issuance - how much supply was there? 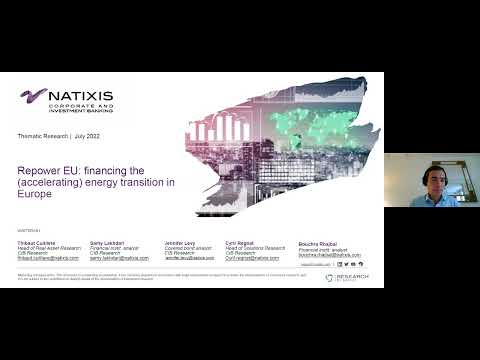 Private Debt: the keys to investing in a growing and evolving market

Metaverse: 1 year after, fad or future?