Provence Grand Large is France's first floating wind pilot-project under construction. Situated in the Mediterranean 17 km off Port Saint Louis du Rhône in the Golfe de Fos on France’s southern coast, the project is led by EDF Renewables in partnership with Enbridge Éolien France 2 S.à.r.l, a subsidiary of Enbridge Inc. and CPP Investments. It will count three floating turbines and is set to enter service in 2023. It is also the first floating wind pilot-project globally to have been financed with limited-recourse financing from commercial banks, including Natixis CIB acting as mandated lead arranger, documentation bank and hedging bank.

In a video in partnership with Loopsider, Christine de Jouëtte, PGL's Project Director at EDF Renewables, and Sybille Grandgeorge, Industry Banker Power & Renewables at Natixis CIB, explain the details of this landmark project. 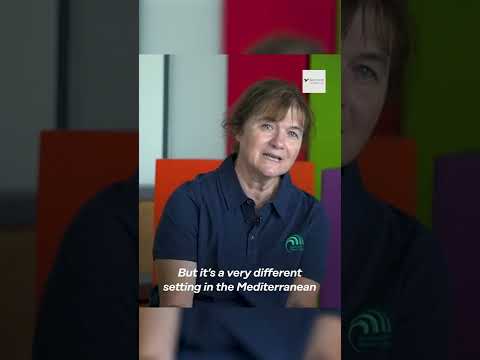 Read the interview with Sybille Grandgeorge

"We are confident that floating offshore wind energy will significantly contribute to the energy transition. This first limited-recourse financing for Provence Grand Large marks an essential step in the emergence of the sector."
Sybille Grandgeorge

Provence Grand Large is based on a technological feat. Can you explain?

Provence Grand Large is the first floating wind project to be built in France. This emerging technology enables projects to be developed in deeper waters than fixed turbines, allowing them to benefit from stronger winds while increasing the distance from the coast. Floating turbines are particularly beneficial for geographies like south France which have a narrow continental shelf that limits the potential of fixed windfarms, particularly in the Mediterranean.

Provence Grand Large’s turbines will be installed on innovative floats designed by SBM Offshore and IFP Energies Nouvelles known as "tensioned mooring lines" which do not rub on the ground and therefore do not disturb the seabed. In addition, the footprint on the maritime domain is reduced to a few dozen meters, compared with several hundred for existing floating technologies. Another innovation is on the cables used to transfer the electricity to shore. The project will use so called dynamic cables that are capable of adapting to the movements created by the swell and the currents.

The project has been selected by the French Agency for Ecological Transition (ADEME) as part of the "Investissements d'Avenir" program. Its three wind turbines will have a production capacity of around 25 megawatts, covering the equivalence of annual electricity consumption of 45,000 people.

A limited-recourse financing on an emerging technology. Isn’t this a risky bet?

Financing an emerging technology requires a great deal of transparency and upstream work between the banks, the technical advisor and the project sponsors to allow the lenders to be comfortable with financing a new technology.

The studies we carry out are particularly detailed, to circumscribe the technological risk and to ensure that the cash flow generated by the wind farm would be able to repay the debt. In addition to the analysis of the contractors' ability to deliver the project, we carried out numerous maintenance scenarios. It is important to be able to assess, for example, the loss of production if a wind turbine had to be brought back to port to change a blade. Of course, the fact that the project is supported by experienced sponsors was a sign of confidence.

As documentation bank, we coordinate the response from lenders on the various contracts and eased negotiations with the sponsors. It is important to work out the contractual structure between the project company and the various companies involved in the construction and maintenance of the windfarm.

How can the floating wind sector emerge?

Floating wind energy has so far been developed mainly in the form of pilot projects, and few floating farms have emerged in the world to date. Kincardine, which Natixis CIB also financed, off Scotland, was one of the first. However, it has reached sufficient maturity to be developed on a larger scale and become increasingly competitive. There is 120GW of capacity in the early stages worldwide, which bodes well for strong growth in the sector in the years to come.

To achieve this, production costs need to be reduced. The cost of energy produced by floating offshore wind is currently about three times higher than that of fixed wind. This will fall with economies of scale as projects increase in size, but to reach parity with fixed offshore there must be further industrialization of the production chain, especially for floats. The current inflationary and rising interest rates context increases manufacturing and financing costs; this affects all sectors, but the impact is more prevalent in emerging technologies. This also requires the implementation of dedicated auctions, similar to those organized in the fixed offshore segment.

Some technical challenges also remain to be addressed so that the current projects can serve as credentials for future ones. New float designs are still being developed, the size of the turbines is increasing, different cable technologies are being studied, maintenance processes are still being developed, and so on. Banks and insurers will tend to favor technologies already in use to reduce technical risk, but developers will want to take advantage of technological advances to reduce construction and maintenance costs.

I will conclude with my firm conviction that floating offshore can strongly contribute to the energy transition. Natixis CIB is the world's fourth largest arranger in the renewable energy sector and we supported the fixed offshore industry when it was still a new technology. We are therefore used to financing the start-up of new sectors when we believe in their potential. In this respect, Provence Grand Large marks an essential step in the emergence of the floating offshore sector.

2022, a year of breakthroughs for the floating offshore industry
Previous

Infrastructure, a safe haven in times of uncertainty

Transition – from bottlenecks to acceleration

Environment: Let’s give the floor to our clients

Will the gas-fueled electric chaos in Europe continue?